Island: Antigua Nickname: The Land of Sea and Sun Sister Isle: Barbuda Known for: Black Pineapples – native to the island and is claimed to be the sweetest Fun Fact: the island boasts of 365 beaches – 1 for each … Continue reading →

Religion has been a focal point of our lives and a major source of controversy since it’s inception. We have been brought up thinking its a mandatory part of life without understanding it’s true effect or even life without it. By doing this we limit ourselves spiritually as well as intellectually.

It’s necessary to analyse life without the “Religion Filter”- we must not confine our minds to a box.

We fail to ask ourselves these questions – what is religion? what is it doing for me? Why do we feel compelled to be a part. Religion is suppose to be a guide to how one “should” live their life with the ultimate goal being coexistence. However, for most people it seems to be more of a distraction. The fundamentals of humanity are put on the back burner and selfish desires take over.

In some cases it preys on the vulnerabilities and misplaced needs of persons who need something “greater” to believe in and in others stems from the fact that we are conditioned to fear death and most religions teach that if you adhere to the religions’ policies that you would “go to heaven” “be saved” or “live forever”.

If you look back in history Roman Catholicism has always been the biggest and most powerful church. You were either Catholic or an abomination, like it was a crime to be anything other than Catholic hence they believe the Roman Catholic Church is the one true church. The strong hold and intimidation by the Catholic church lead to the emergence of protestant churches.

Over the years so any churches have emerged – some with questionable motives taking the form of a very strategic business with the allure of tax free exemption where they find ways of extorting money from the congregation/parishioners. They preach total devotion to the church at whatever costs and that good work is being done as a result of the sacrifices.

Religion should not be associated with absolute ludicrous policies such as “Disconnection” and “Fair Game” in Scientology and Disfellowship and Two Witness Policy in Jehovah’s Witness. And thanks to Leah Remini and Mike Rinder on the award winning A&E show “Scientology and the Aftermath” for exposing the abuses endured by persons and giving them a platform to share their experiences. Church, if anything should bring people together not divide them, encourage speaking out against abuses and criminal offences and not cover them up.

The most devastating result of a cult was the Jonestown Massacre in Guyana spearheaded by the People’s Temple leader Jim Jones where over 900 people committed coerced suicide by drinking kool-aid containing cyanide. When this kind of mind control is attained there should be some form of oversight and the implementation of deterrents for persons using the facade of church to exploit people causing irreversible psychological trauma.

Day 3 Island: Sint Maarten (Dutch)/Saint-Martin (French) Known as: The Friendly Island, “Land of Salt” & the Culinary Capital of the Caribbean Popular Spot: Maho Beach for airplane watching Known for: being the island with a unique status….. one landmass … Continue reading →

Day 1 Island: Saint Lucia Nickname: Helen of the West Indies Local Beer: Piton – after the twin peaks What I liked most: the topography, villages and the general atmosphere which is very similar to Grenada; only more developed. PITONS … Continue reading →

The Clabony Sulphur Springs is tucked away in the hills of Byelands St Andrew which is also the source of the Clabony bottled water. Getting to the springs is a short 2 minute walk from the main dirt road and 10 minutes away from the Footprint air bnb hut perfect for a getaway from the hustle and bustle; totally off the grid.

A soak in the spring is the ideal way to kick back and rejuvenate in the most natural and simplistic way. 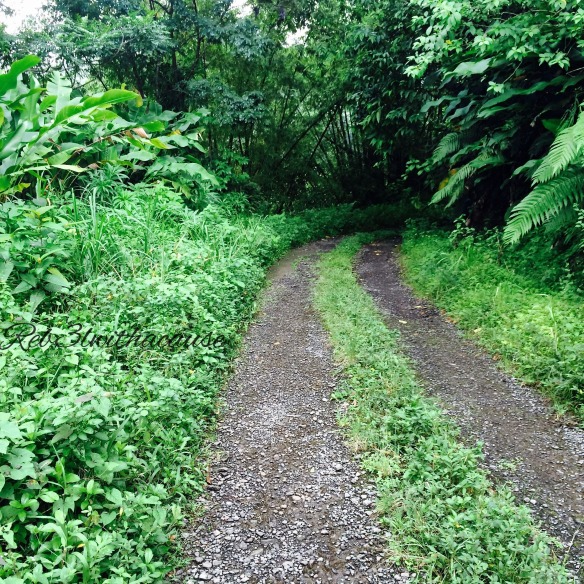 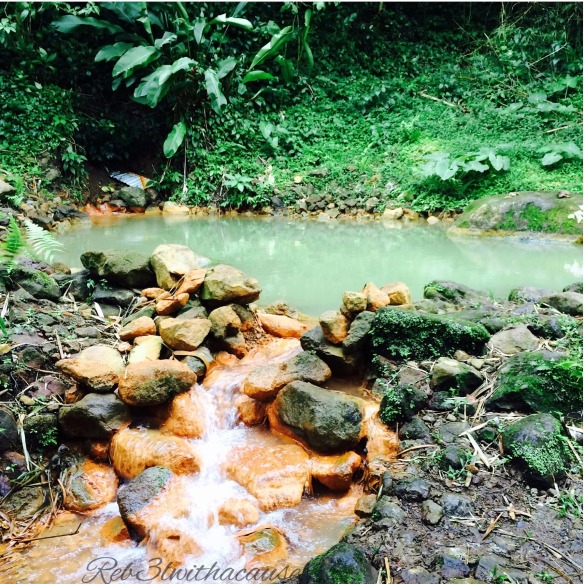 Natural spring – water is warmer and bubbly. *Orange colour on the stones is sulphur. 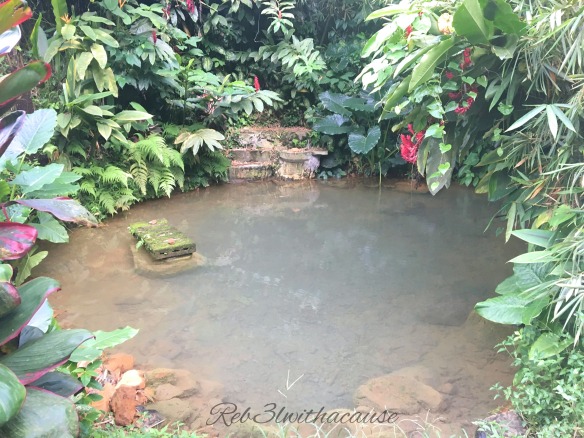 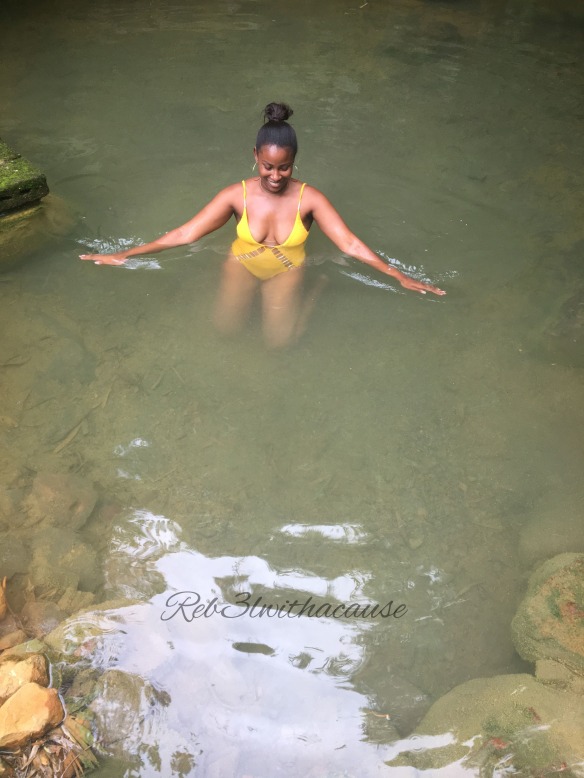 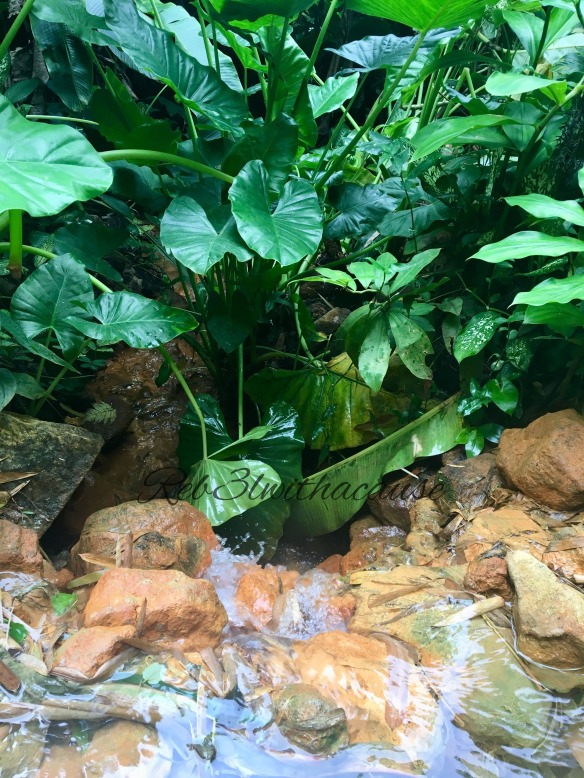 The Justice System is in dire need of reformation by instituting stricter penalties for certain offences. For this to come to fruition the public has to play an instrumental role in pushing for change. A lot of issues are forgotten and left by the way-side, instead of taking measures to curb temptations for reoccurrence.The penalties need to allow persons to think about their actions.

Child endangerment cases should be pursued and not ruled an accident. Leaving a minor (especially one who’s disabled or mentally challenged) home alone can result in harm to the child including death. It’s time parents must take responsibility for their actions.

There should be more life sentences for murder and heinous sexual crimes. How is justice served when victims of abuse are sent back to the environment where the abuse takes place. “Safe havens” must be established in the form of temporary foster care homes (where persons are thoroughly vetted) and the provision of adequate counselling programs. An substantial investment must be made into our children to ensure they have the opportunity to bloom.

In the case of vehicular manslaughter, traffic regulations should be enforced with a zero tolerance policy on speeding, driving under the influence and obstruction. Traffic at critical locations needs to flow efficiently. This is dependent upon having more traffic lights and traffic officers.

The universal problem of littering may not seem as significant but enforcing litter laws and putting into effect litter wardens can be beneficial to the environment and a plausible revenue stream. Since we depend so much on tourism sector, maintaining a clean, pure and beautiful Grenada is essential.

Given we’re a society that consumes huge amounts of alcohol, regulations must be passed in regards to public consumption. Too many bar brawls end up in persons losing their life. As a small island with one of the lowest crime rate it’s important that offenders are prosecuted to the fullest extent of the law and that “John Public” understand the consequences of foolhardy actions.

A relatively short but bumpy drive from the main road takes you to the Crochu harbour point in St. David- the location of Cabier Ocean Lodge. where you have a 180 degree view of the sea. Although St David is the only parish which lacks a town it makes up in cozy points with great potential for beautiful developments.

I had the pleasure of visiting the lodge after Caribbean Youth Environment Network CYEN hosted a sargassum beach clean up of the nearby Cabier beach for World Oceans Day celebrated on June 9th. 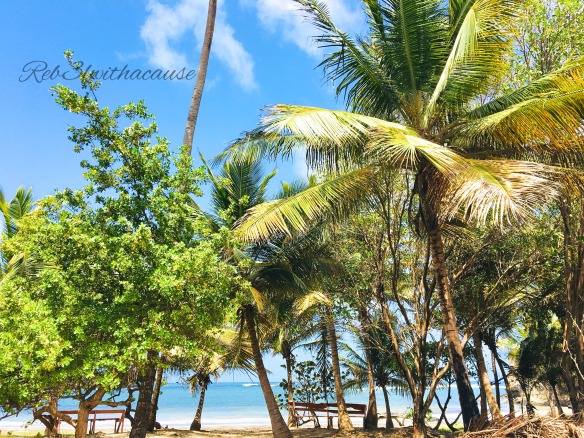 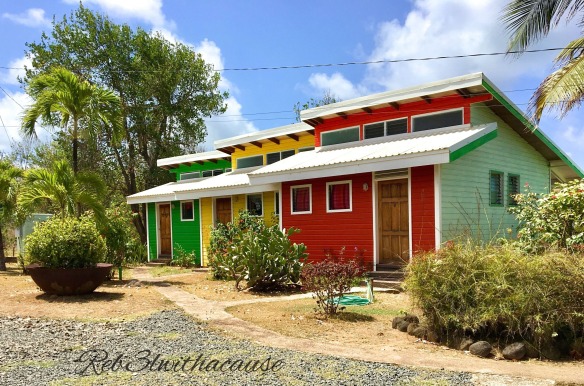 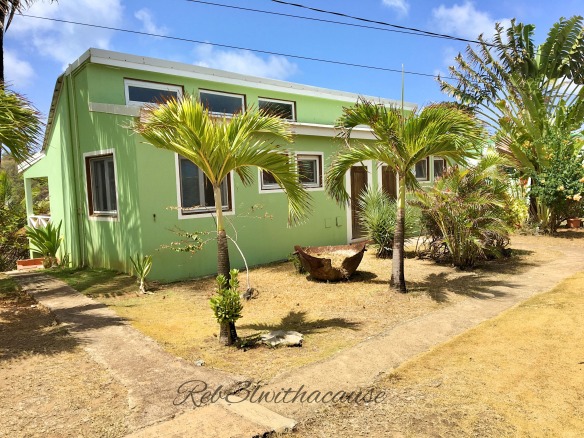 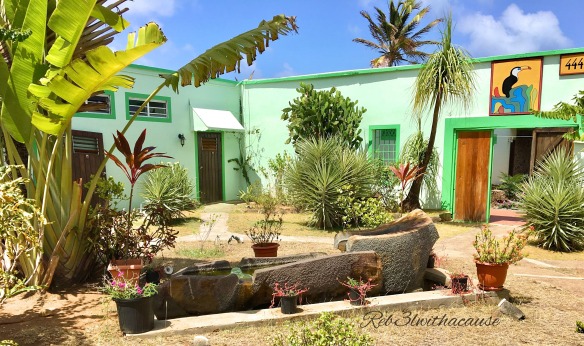 Painting on the wall: L-R Banana, Cocoa and Breadfruit trees 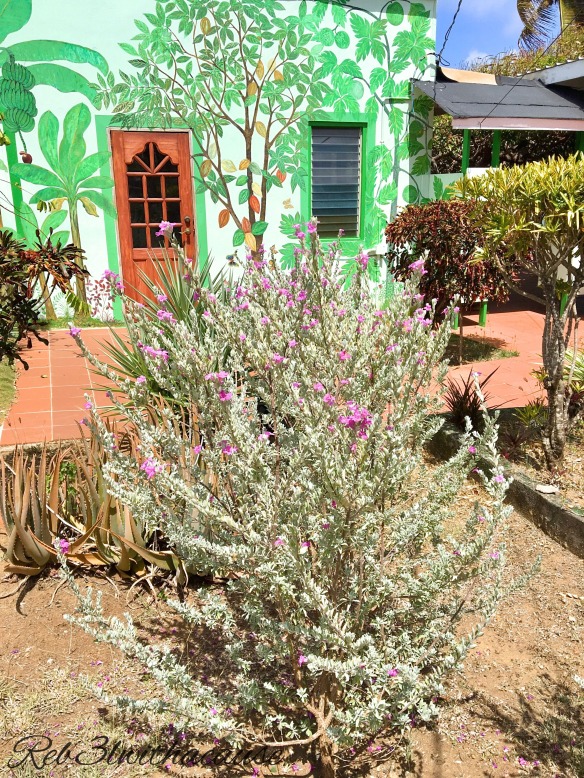 Start of the 180 degree ocean view… 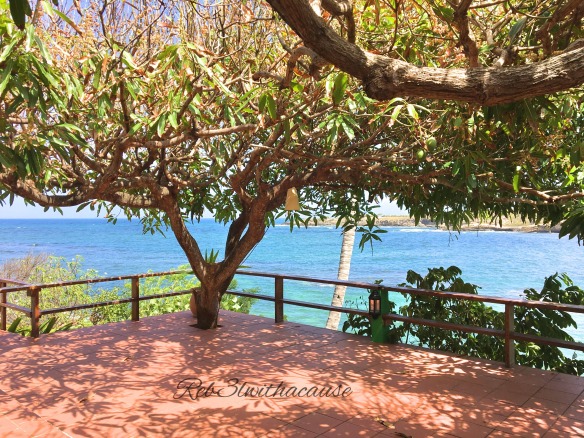 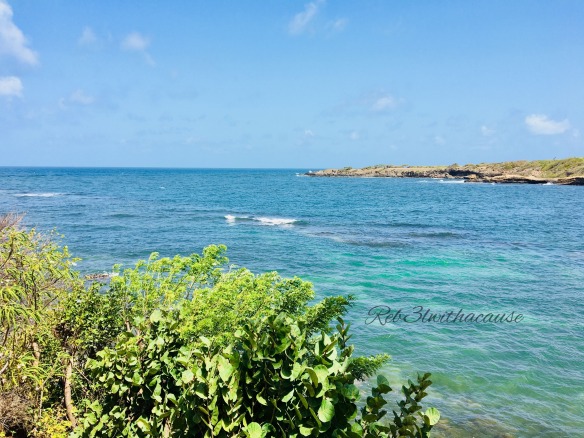 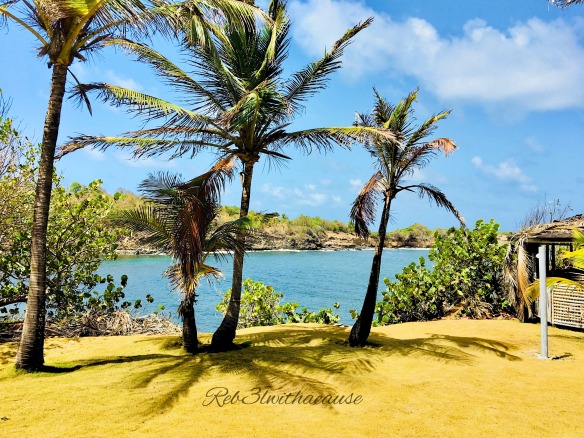 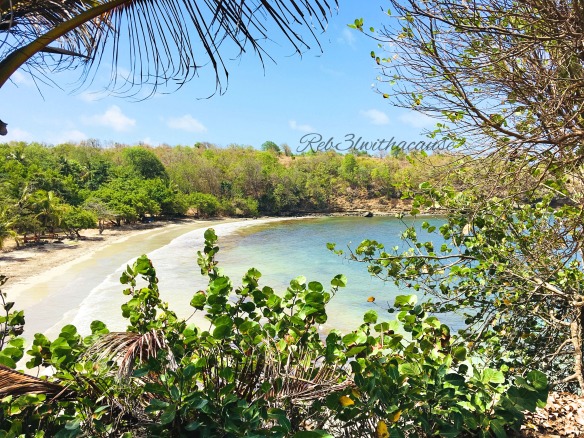 We live in a world that places education on a pedestal as it’s the key to a successful life. For too long we have followed the path of our ancestors instead of following our own. The route way of living is something of the past. We must be open to unconventional methods as a way of succeeding in a changing world. Simply taking the route that we believe is easiest or possess less chances of failure would not lead to a fulfilling life.

Millennials and following generations have to work twice as hard as a result of the emphasis placed on having degrees to validate one’s abilities within a certain profession. They tell you get an education but when all jobs require experience how are you suppose to get a start when no one wants to give you a chance. The education system is severely flawed and other than being lucrative for investors, it’s usefulness in assisting graduates in getting jobs has decreased.

A lot as changed in recent years. Before the recipe for success entailed work hard and good grades, nowadays you have to work twice as hard, be multifaceted and innovative. It’s time we move past the belief that it’s not enough or realistic to pursue artistic talents, when in fact it can be cultivated into a business which can result in a life of relative freedom and independence. We must encourage the youths to develop their talents and not convince them that they need a degree to be successful. Nonetheless we must always strive to gain knowledge and pursue other fields throughout our lives.

The most easily accessible waterfall on the island is located 6 minutes from the town of St George with a short walk in from the main road. It’s the ideal outing if you’re not looking to get dirty. Mini photoshoot … Continue reading →

Rome Museum – located in Walker, Plaisance Saint Andrew was founded by Joseph Rome which was inspired by a school project when he was a boy.

From the moment I saw pictures of thin the lush green hills of Nettle Point of St. Mark lies a hidden gem. Established in 1763, it is one of the few plantation estates still in operation, and it’s picturesque antique … Continue reading →

Try these 5 tips before turning to antibiotics. END_OF_DOCUMENT_TOKEN_TO_BE_REPLACED

The game of comparison is a dangerous one and highly consequential. When you evaluate your life based on ideas that are unfounded you in turn hinder your growth and surrender power over your life. And it’s not worth your perception on someone because of who their parents are, where they live and being able to afford certain luxuries. You don’t see what’s on the inside – behind the smile.

Material things don’t shield one from pain. Life does not discriminate. Each persons circumstance results in different struggles. No one person’s struggle is more significant than another, no matter what it is or how trivial it may seem. As much as we are alike, we experience things differently which is in line with our uniqueness.